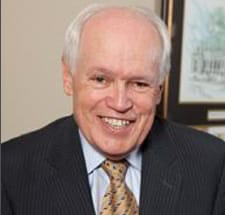 Bill Hunter was called to the Bar in Ontario in March, 1973 after attending the University of Western Ontario to obtain his LL.B. Since that time, he has developed a broad and extensive civil litigation practice which includes elder and estates law, personal injury, medical malpractice, employment, family law property disputes, municipal and general litigation matters. As well as having appeared before various provincial tribunals, he has appeared before all the trial courts in Ontario and the Ontario Court of Appeal.

In 1997, Bill completed a program of training in Alternate Dispute Resolution with the University of Windsor. He has acted as a Mediator on various matters.

Bill is the head of the Litigation Team, including the experienced litigators, law clerks and a paralegal at Vice & Hunter LLP. The Litigation Team is conscious of the costs of litigation which is why they coordinate their efforts to produce the best result for clients in a cost-efficient manner.

80% of Practice Devoted to Litigation